I write this with the full knowledge that you will most likely never see it. Admittedly, this isn’t a typical fan letter but nonetheless, since I have survived roughly three weeks with you or The Daily Show, I felt I deserved to reach out to you.

First of all, congratulations on a job exceptionally well done and best of wishes on your future plans. I just wanted to take the time to personally thank you for 16 years of incredible work at Comedy Central. I’ve no doubt you’ve heard compliment after compliment (and angry diatribes from your critics, which also count as compliments) over the years and especially in recent months. So I’m sure you realize you've bowed out with a bang.

Still, it would feel wrong for me to not at least attempt to explain how important your time at The Daily Show has been to me and my family.

I’ll try not bog this down with rambling details so long story short, my dad is in the final stages of Alzheimer’s. I’m sure that was a twist you didn’t see coming in this, right? Sadly, we all saw it coming and now that it’s full blown, it’s getting scarily easy to reminisce about the past. I was never one for nostalgia but when the man you know as your father has been replaced with an entirely different, weaker, more vulnerable individual who can no longer communicate, it becomes one of your favorite pastimes.


So what does this have to do with anything? And why in God’s name would I include this in what should just be a gushing fan letter? Well, I mention it because there were only a few men in this world that my dad truly loved. He idolized Humphrey Bogart, definitely nursed a crush on George Clooney, and, because he was a bleeding heart liberal, admired Michael Moore. But honestly, you were always at the top of that list. 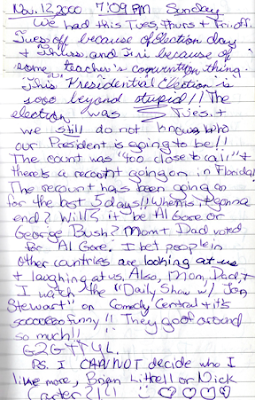 I was 12 when my parents started watching you on The Daily Show in 2000 and ever since then, you have been the voice in the back of my head: the voice for reason, compassion, humor, and an inability to swallow bullshit. Together, you and my dad inspired me more than any other men in my life, and for most of my rocky and angst-filled teenage years, I wanted to be a muckraking political journalist. My teenage diaries are filled with entries of angry and vague political manifestos and glowing mentions of you and The Daily Show, next to discussions of the Backstreet Boys, of course. You most likely never anticipated being written about in a 13 year old girl’s diary (at least I hope not). My high school journalism teacher wrote in my yearbook that I had a “fire in my belly to tell it like is.” I got that from you and my dad.

You see, my dad was the most politically aware person in my life. He read everything, watched the news faithfully, rented documentaries for the family, and expounded the importance of being a civically-engaged and socially progressive citizen. My dad believed that simply being aware of what the hell was going on around us was the key to democracy and I was repeatedly amazed when visiting friends or acquaintances at how unaware so many people seemed to be. Of course, my dad’s teachings had a liberal bias but he was more concerned that I learn to think for myself and dig for the answers than agree with him (though I tended to agree with him).

So, as a family, we watched you on The Daily Show religiously. As I said, I was only 12 and horrifically unhappy. That same year, I read, for the first time, George Orwell’s Animal Farm at the encouragement of my fifth grade teacher. I knew nothing of socialism and only knew Stalin by name but reading Animal Farm in the back of the classroom gave me my first epiphany: sometimes, politicians lie to us. I haven’t been the same since.

It would’ve been easy to just get more depressed (I certainly wouldn’t have needed much help then) but The Daily Show made it all easier to bear. Instead of getting angry and disillusioned (though I did have my moments during George W. Bush’s presidency), I laughed. My entire family did; my dad the loudest.

You and the rest of the rotating cast of The Daily Show became a source of comfort for us and when I was 17, my father took me to see you live at Count Basie Theatre for my birthday. I can still feel the ice slipping underneath my feet as we ran down the block together to make the show on time. I cherish that memory to this day.

When things got really terrible, you seemed to understand. I have a particular memory burned into my consciousness of sitting in my room at age 13 only a few weeks after September 11th. I was watching you discuss that awful day and when I saw you begin to speak, I screamed for my mom to come and watch. We sat together at the edge of my bed and cried with you.

You’ve actually made me cry a few times, you bastard. Same with Stephen Colbert. The both of you made me lose it most unattractively during Indecision 2008 when Barack Obama was announced as the President. It didn’t help that I had doubted such an outcome was possible and was suffering from a cold. Luckily, I was alone in my dorm so my walking around in circles sobbing was seen by no one.

So, before this gets even longer, I just wanted to say thank you. You definitely deserve a break and I’m excited to see where The Daily Show will be headed. I just have to admit that when you announced your departure, I cried because my dad wasn’t even cognitive enough to understand what I was telling him. I ran into the bedroom where he was laying in his hospital bed and told him anyway because in the months leading up to his rapid decline and loss of speech, he still laughed whenever I turned on the TV and said, “Look, Dad, it’s Jon Stewart.” He had no idea what you were saying but he recognized your face as someone important to him.

So thank you for giving my dad that.

Good luck with everything,
Kerry 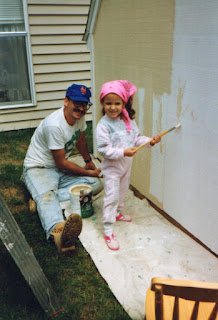 PS. If anyone would like to join the cause to end Alzheimer’s, please consider donating or volunteering. According to the Alzheimer’s Association, “an estimated 5.3 million Americans of all ages have Alzheimer’s disease in 2015″ and “by 2025, the number of people age 65 and older with Alzheimer’s disease is estimated to reach 7.1 million” but we can end this now if we work together. Please consider joining the cause. On behalf of my family and the millions who are affected by this terrible disease, thank you.