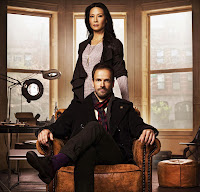 I’m a huge fan of Elementary and could probably write essays on multiple episodes’ sheer amazingness. From Lucy Liu’s pitch perfect portrayal of Joan Watson and Jonny Lee Miller’s eerily canonically accurate Sherlock Holmes to the awesome diversity of the cast and sets and Sherlock and Joan’s partnership of mutual respect, Elementary has become the best version of the Sherlock Holmes canon in years and one of the best dramas on network television right now.

But it was “M.” that demonstrated the dark side to Elementary and opened up Joan and Sherlock’s universe beyond the brownstone.

“M.” gave us what few renditions of Sherlock Holmes have: an accurate and scary Sebastian Moran. For once, Moran was how he was described as in Sir Arthur Conan Doyle’s “The Empty House”: an impossibly dangerous man capable of great evil.

His menacing presence was captured perfectly by Vinnie Jones, and his scenes with Sherlock were suspenseful and enlightening (though not always for the best).

The power in this episode did not lay in the violence, which was somewhat graphic, or the twist that Sherlock and Joan were chasing a hired assassin, not a serial killer. It was in the performances of the three main players: Moran, Sherlock and Joan


What is so great about Elementary is the strength in Sherlock and Joan’s relationship. At this point in the series, they are at a crossroads: Joan’s contract as Sherlock’s sober companion is up and she is contemplating taking on a new client. It’s obvious to the viewer that Sherlock is not ready to lose Joan and his already raw state is exacerbated by the apparent return of the same killer who murdered the mysterious Irene Adler.

The viewer therefore felt suspense not only for the solving of the crimes and the capture of Moran but to see what turn Joan and Sherlock’s relationship would take. Joan recognizes the turning point and potential end to her time with Sherlock, when she quietly observes while in a morgue: “I’m going to miss this. Well, maybe not this but this. Working with you. I think what you do is amazing.”

This is a Watson who truly and openly cares about Sherlock. Sherlock’s wellbeing is important to her and she takes it upon herself to ensure it, even if it means lying to him or endangering herself.

Sherlock, meanwhile, is at such a confused and vulnerable state that he allows his past and desire for revenge to blind him. For once, we get a Sherlock Holmes who is openly flawed and acknowledges his shortcomings. We also see him express deep emotions, such as when he begins to quietly weep as Moran taunts him about how he is wrong about Irene’s death.

Unlike other renditions of the great genius white guy that we seem to get in countless other shows and films, Elementary’s Sherlock can not only be catastrophically wrong but capable of terrible things in being so. His attacks on Moran were violent and surprising for the viewer, as Sherlock had, up until this point, been endearingly ethical (at least according to his own morals).

The conclusion of the episode was arguably the best part: Sherlock finally and openly acknowledges Joan’s importance to him and by repeating what she earlier said to him, demonstrates that their relationship is one of equality and mutual understanding.

“M.” set the tone and readied the viewer for the rest of the season, in which the threat of Moriarty hung over everything. It was a shocking, exciting, scary and moving episode and it demonstrated the greatness that Elementary is capable of.

All images copyright CBS
Posted by Kerry at 3:55 PM